‘I made it to university, but then I fell through the cracks’

By Dan Rowley on Comments Off on ‘I made it to university, but then I fell through the cracks’ 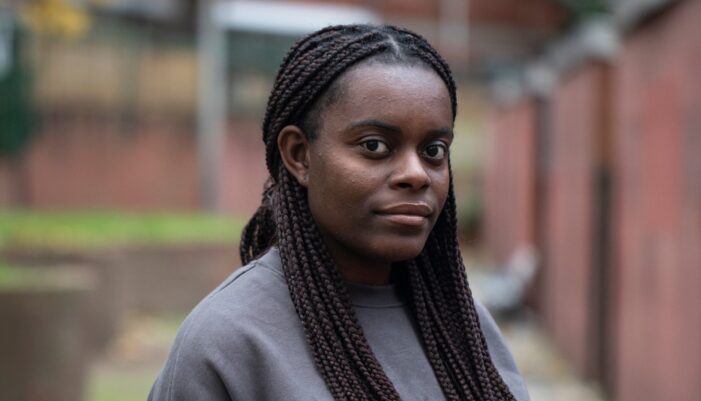 About 10,000 young people move out of the care system in the UK every year. For some there’s a sudden cut-off with little support on the other side. Kim Emenike describes her experience of what has been described as a “care cliff”.

The summer before Kim Emenike turned 18 her foster carer – who she’d lived with in south London for the best part of a decade – made it clear she wanted Kim out as soon as possible.

Kim’s mum had died from cancer when Kim was seven. Her dad wasn’t in the picture and there weren’t any other blood relatives, so as a young child Kim had been placed into care.

For the first five years things were “absolutely amazing,” she says. But from the age of about 13 the relationship with her foster carer began to break down.

“I don’t know if I could ever pinpoint exactly why we weren’t getting on – I guess we were just very different,” she says.

Kim was excelling at school, and had become involved in the local youth council and the UK Youth Parliament. But her foster carer showed little interest.

“That created friction between us because these things were very important to me,” Kim says. “The situation got really bad, and it was very hard for me mentally and emotionally.”

Kim’s social worker and school were aware of the problem, but it was decided that she should remain in her foster placement until she had completed her GCSEs.

“So I had to stay there and get through it,” Kim says. “In hindsight, I don’t think it was the best decision.”

Kim had had various social workers over the years, and at 16 was assigned a personal adviser who’d be with her until she was at least 21 and whose job it was to make sure that Kim understood what services and support were available to her as she became independent.

“I had a Pathway Plan which gives you an overview of the coming years,” Kim says, “but it’s essentially just a tick box – I wasn’t really prepared for what was about to happen.”

In some cases, young people can remain in their foster placement after they turn 18 – this is called a Staying Put arrangement and gives them a bit more time and support while they figure out how to live independently. But there was no chance of that for Kim.

“I knew that was never going to happen – my carer had made it very clear that she didn’t want me,” she says.

So Kim needed to find somewhere else to live.

When she had finished her GCSEs, Kim was told she could move out of her foster home and into a hostel and that she should arrange to go and see it. Her foster carer refused to accompany her to the viewing, but a teacher volunteered to go along, to make sure that everything was OK.

“I was lucky that my school was very hands-on and I had a good relationship with my teacher, but I don’t think that’s an experience that everyone has,” Kim says.

The flat at the hostel was pretty basic. She’d need to buy her own toaster and many other essentials – but she had her part-time job at Nando’s, and she could plan and save and start budgeting.

But then Kim was told that if she wanted the flat she’d have to sign up there and then and move in straight away.

“I was shocked and absolutely frightened,” she says. “I was 17 and I’d never lived on my own. This was a big transition, and everything at that moment seemed unstable and uncertain. [I thought] surely we were going to agree a date, giving me two or three weeks to prepare?

“It was just very daunting, overwhelming and sudden.”

As the alternative was staying somewhere she no longer felt welcome, Kim decided she’d have to take the place at the hostel. Her teacher helped her fill in the paperwork and provided the bin bags into which Kim packed up all her worldly belongings.

“I’m so grateful my teacher did all that, but she shouldn’t have needed to. Surely social services or my foster carer should have put something in place for my move? Even just given me plastic bags or boxes to put my stuff in,” Kim says.

Her foster carer didn’t say a word as Kim and her teacher shuttled back and forth from the house to the car carrying all the things Kim had accumulated during the 10 years she’d lived there.

“Are you not going to say anything?” Kim asked her foster carer when it was time to go.

“Oh, bye,” her foster carer said as she came to the door. And that was it.

“I’d called it home and saw those people as family,” Kim says. “I didn’t have anyone else, so to have an exit as blunt as that was hard. I thought, ‘Wow, I’m just a statistic.'”

Life in the hostel was challenging. All sorts of people were coming and going at all hours, there were fights and disagreements, people threatening each other. A young man who’d recently been released from prison was living on the other side of a thin wall. Downstairs, a woman with severe mental health issues tried to kill herself and it was Kim who found her. Others lived there because they didn’t get on with their parents. All of them were vulnerable, homeless and under 25.

At night Kim would lie in bed and cry, unable to sleep because of the loud music that would play until the early hours.

“At the age of 17, having to deal with all that was crazy,” she says. “I was vulnerable myself, I was still a child, and being amongst all that it would have been easy to be coerced into doing something that I didn’t want to do, purely because I was being exposed to it.”

Kim was eligible to claim benefits and she still worked at Nando’s, but eventually she had to quit her job to focus on her A-levels.

“I was in year 13 and it was hard – it’s your biggest year – you’re trying to get into uni and you’re worrying about your future,” she says.

But even when it was peaceful enough for Kim to be able to concentrate on her school work, the lack of any internet connection at the hostel hampered her ability to study there.

“So I’d have to get up at six to get to college to use their Wi-Fi to catch up on work that I hadn’t done the night before,” she says. “It was a hard environment to be in – not everyone was striving to get into uni or on to an apprenticeship – a lot of them were just sitting there waiting for a council house. I wasn’t with like-minded individuals.”

Without her Nando’s wages to augment her benefits and unable to access her Leaving Care Grant because she wasn’t yet 18, money was tight, too.

“With my benefits I had to pay for my gas and electricity, and I also had to pay Council Tax which I think is absolutely absurd if you’re 17 and in full-time education,” she says.