Grandparents ‘run up debts’ to care for grandchildren 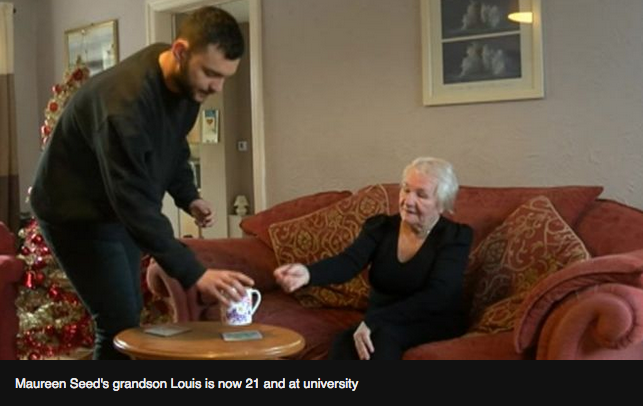 Grandparents are running up large debts raising children whose parents cannot look after them, surveys have found.

Nearly 200,000 children in the UK are being raised by a family member other than their parents and findings show the burden often falls on grandparents.

Maureen Seed, from Wakefield, West Yorkshire, looked after two of her grandchildren for 16 years because of her daughter’s drug problems.

She amassed about £20,000 of credit card debt and is facing bankruptcy.

Two charities carried out surveys of kinship carers – people who look after grandchildren, or the children of other family members or friends. They suggest Ms Seed’s case is not unusual.

One found more than a third of carers used a credit card to buy food, while a similar number missed paying a bill.

There is no statutory entitlement for kinship carers and charity Grandparents Plus wants a national minimum allowance introduced to cover the costs of raising a child.

Cheryl Ward, from the charity Family Fund, added: “There’s a long-standing issue with support for grandparent carers – they’re not recognised financially, as someone with special guardianship is.”

The Department for Education said it recognised “the crucial role that grandparents play” but local authorities were responsible for advice and support.

Ms Seed, 74, took on caring for her grandson and granddaughter when they were aged five and two.

She had given up work to look after her husband, who suffered a heart attack and stroke and eventually went into a care home, and money was scarce.

She spent on credit cards so the children could go on school trips and holidays, and is currently going through bankruptcy to clear her £20,000 debt.

Eventually Ms Seed got family allowance and child tax credits, and fought for residency payment from the council, at £40 per child, per week.

Her grandson Louis, now 21, is at university and her granddaughter, 18, at college.

Louis said: “I feel like my nan saved my life. My life could have been very, very different.

“I remember some of the houses I was in with my mum – scruffy houses, around strangers all the time. We had to be got out of there really.”

Ms Seed said: “I wanted them out of that, I didn’t want them to live that life. I wanted them to have a stable, happy childhood, to have the things other children have.”

‘I didn’t have any money’

Jayne Taylor, 60, from Leeds, was contacted by social services in May 2014 about looking after her granddaughters, now 14 and 17.

Both suffer from epilepsy and other behavioural issues.

Ms Taylor has resorted to food banks at least four times because she was desperate for help.

“I had to make sure they had clothes, even uniform is so expensive. Even if you had savings you would go into it and that’s hard when you’ve been working all your life.”

Ms Taylor said she went to parenting classes but bringing up children now was “very different” compared with when she was a mother.

Grandparents Plus surveyed 4,000 kinship carers. Family Fund, which provides grants for families on low incomes raising disabled or seriously ill children, surveyed primary carers it supported financially who described themselves as a grandparent and/or were 60 or over.

Grandparents help more UK mums get back to work

UK ‘behind’ on grandparent childcare provision

More stories and updates from across Yorkshire

The Grandparents Plus survey, based on 671 responses, suggests the most common reason children are in kinship care is due to parental drug or alcohol abuse (55%).

What help can kinship carers get?

There is no statutory entitlement to financial support for kinship carers – local authorities decide what support is available in individual cases.

Registered foster carers are entitled to financial support but kinship carers have no equivalent entitlement.

Help is difficult to access if the carer is looking after the child as a private arrangement with no legal order.

Someone raising a grandchild or the child of another relative or friend may be able to claim benefits available for children, low-income families, older people, or those with a disability or long-term illness.