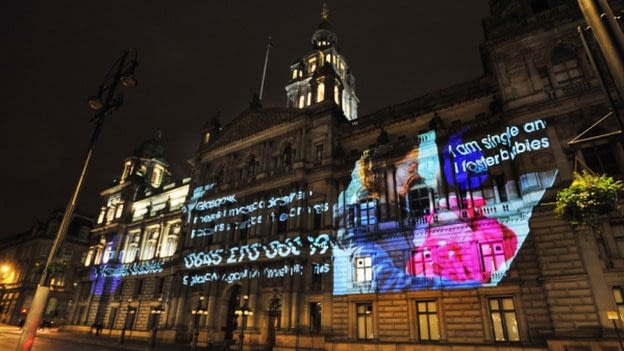 A series of images are to be projected on to Glasgow City Chambers later as part of a campaign to recruit more foster carers and adoptive parents.

The images promote the message that single people, unmarried couples, same sex couples, over 40s and non-home owners can all have roles to play.

Glasgow City Council said it needed help to provide homes for the rising number of vulnerable children in care.

“Faced with ever increasing numbers of children in care, it is only sensible that we explore every available avenue to ensure we get the carers and adopters the city needs.

“The images projected on to the city chambers illustrate the wide range of people who can help us look after the young people in our care.

“I’m sure the images will give people pause for thought on what is possible with fostering and adoption nowadays. If anyone has ever considered fostering or adoption then now is the time to step forward.”

The council now has around 500 fostering households, many of whom are moving close to retirement.

More than 1,200 young people are looked after by foster carers with the council looking after some 3,600 children in total.

lmost two-thirds of the children looked after by the council had parents with drug or alcohol problems.