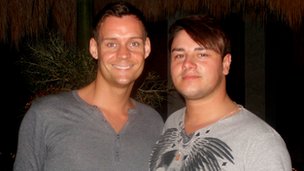 “He stepped into his bedroom and just looked around like he’d gone to Willy Wonka’s chocolate factory: ‘Is this my room?’, he asked.”

For Stuart Price and Lee Rennison, it was a moment that highlighted the importance of the work they are doing.

They became foster parents in Leeds last year and the eight-year-old boy they are looking after has settled well.

Mr Price said: “It’s really rewarding and you think: ‘If it wasn’t for us, this kid could be in a home or living in the circumstances he was taken out of.’

“You can’t change what has happened but you can influence the future. You take the satisfaction out of it.”

Leeds, which is the third largest city in the UK, fosters about 1,300 children a year, numbers which are at a 10-year low.

As part of a national awareness campaign by charity New Family Social, lesbian, gay, bisexual and transgender communities are being targeted to consider fostering and adoption.

Mr Price, 28, and Mr Rennison, 26, decided to take the step of becoming foster parents because of their love of children.

Since caring for their first child in December, they said they had found that they were “pushing the social boundaries that little bit further”.

Mr Price said: “There is prejudice out there and you’d be naive to think there isn’t.

“We have both experienced bullying and prejudice, at school and later on in life so it’s not something we’re unfamiliar with.

“We’ve both developed our coping techniques.

“We had a situation once when we were in a restaurant with our friends who are also gay men. There were four of us with the child and we overheard this woman talking to her friend on the next table saying: ‘Where is the boy’s mother?’.

“You hear stuff like that and people look at you. I’m thick-skinned.”

Like every foster parent who goes through an assessment before being approved, they are prepared for the unknown challenge ahead, including, what questions will be raised by a child in their care.

Mr Price said: “We went through the assessment and we were asked how we would cope if the child asked about our relationship.

“We were given scenarios and you have to articulate an appropriate response. So we have come up with a few and what we would say.

“We’ve never ever had the conversation with him.

“We’ve just lived our lives as we would normally, we will wait for him to ask us, if he ever wants to.

“It’s for him to ask the questions and we’ll have the conversation when he does. He’s never asked why Lee and I share a bed, so it’s just not an issue to him.”

Mr Rennison, who works as a freelance hairdresser, took the decision to do mobile hairdressing to fit around looking after their foster child.

Mr Price works full-time as the head of employee relations at a firm in West Yorkshire.

Since being approved as foster parents in November 2011 the couple, who have been together for three years, said they were working with other same-sex couples who are interested in fostering in Leeds.

Mr Price said: “I’ve never realised how behind society is with this process. I’ve never really seen it as an issue. It’s kind of hit me how much work there is to do.

“I’m really interested to speak to some men about why they’ve not done it before and what’s held them back.

“I don’t think many gay people would be that bothered about prejudice. I think they will be in the same place as us, which is if any issues come up we’ll deal with them.”