By Dan Rowley on Comments Off on Fostering Wales, leaving age should rise to 21, charities say. 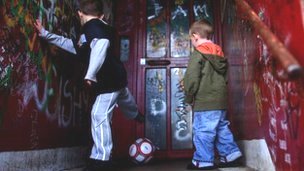 Twelve charities have called on the Welsh government to change the law and allow foster children to stay with carers until they are 21.

Currently young people have to leave their foster carers when they turn 18. However, charities including Fostering Network Wales, say allowing them to stay longer increases their chance of success in life.

The Welsh government said it was committed “to improving outcomes for looked-after children in Wales”. Wales is trialling a scheme that allows some of about 4,400 children in foster care to stay beyond the age of 18.

It comes as the UK government has announced that children in care in England will be able to stay with their foster families until they reach 21.

The Department for Education has provided £40m over the next three years to fund the plan.

Bryn Miles, 62, and his wife Linda, from Llysworney in the Vale of Glamorgan, have fostered more than 50 times over the last 18 years.

Mr Miles said he “100%” supported the call to increase the leaving age to 21. He said: “Support and advice and guidance shouldn’t end at 18. One day they are with you, and the next day they’re gone.

“I can imagine myself at 18. If my parents had said ‘you have to leave on your 18th birthday’ I just wouldn’t have known what to do.” Mr Miles and his wife specialise in looking after teenagers, and say it can be traumatic for them to be forced to leave when they are 18.

He said a separate scheme is in place – called assisted lodging – for people aged over 18. However, he added: “Although I’m approved to foster, I’m not approved for this assisted lodging. The amount of red tape you come across is unbelievable.”

Care charities have called it the most significant reform for children in care in a generation. However, in Wales, young people being fostered would normally have to leave their carer’s home when they turn 18.

The charities say a proposed amendment to the Social Services and Wellbeing (Wales) Bill – to be discussed at the Senedd on 4 February – does not force local authorities to allow young people to stay with their carers beyond 17. They are calling on the Welsh government to “strengthen its proposals” before the debate.

The charities claim that “the longer a young person can stay with a foster family, the more successful they are later on”. They claim care leavers are “less likely to do well educationally, and are more likely to have a mental illness, be homeless, misuse substances, be unemployed or spend time in prison than those who haven’t been in care”.

In a letter to deputy minister for social services Gwenda Thomas, they said: “Experience shows that we cannot rely on the voluntary, guidance-led approach to solve this problem.

“Legislation to allow young people to stay in foster care until at least 21 is required to make a real difference.”

The letter is signed by the Fostering Network Wales, Action for Children-Gweithredu dros Blant, The British Association for Adoption and Fostering, Barnardo’s, Children in Wales, Gofal, NSPCC Cymru/Wales, NYAS, TACT, Tros Gynnal Plant, Voices from Care and the Who Cares? Trust.

A Welsh government spokesperson said: “It is important to emphasise that for those young people now reaching the age at which they are considering leaving care, there is nothing to preclude a local authority from supporting that young person to remain with their foster carers after the age of 18.

“The When I Am Ready” guidance provides comprehensive information and advice for ‘corporate parents’ in Wales to offer opportunities to young people who do not feel that they are ready to leave care and move into independent living.

“The Social Services and Well-being (Wales) Bill demonstrates our commitment to improving outcomes for looked after children in Wales”.