By Dan Rowley on Comments Off on Foster care: Cromwell High School fire 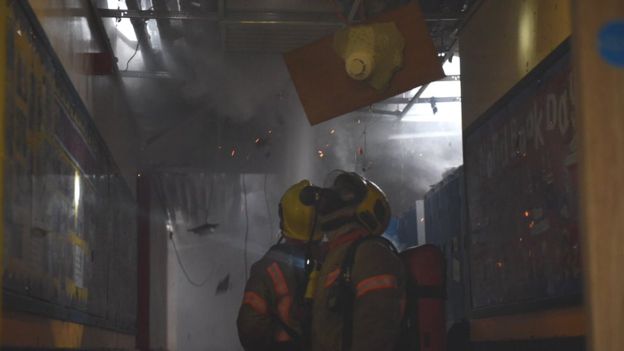 Three teenagers have been sentenced for starting a fire which badly damaged a school for children with special needs.

Two boys aged 15 and a 14-year-old boy admitted arson with intent to endanger life after the fire at Cromwell High School in Dukinfield in April.

Two of the boys appearing at Tameside Youth Court were sentenced to 12-month intensive referral orders.

The other was given an 18-month rehabilitation order and placed on a curfew for three months.

The boys, who cannot be identified, had all been living in foster care at the time.

About 50 firefighters tackled the blaze on Yew Tree Lane in the Dukinfield area of Greater Manchester.

No-one was hurt, but the blaze caused damage expected to cost £1m to fix.

The judge said it was clear the boys were horrified by the consequences of their reckless actions.

He told them: “I have given you the benefit of the doubt.

“If you breach these orders, you will be back before me and you will be taken into custody.”

At an earlier hearing, the court heard the boys entered the school through an insecure door and went out into a play area, where they set fire to a polystyrene takeaway container before leaving without putting the fire out.

One of the boys admitted he was “too lazy” to extinguish the flames and they left because it started to rain.

Another boy uploaded a picture of the smoke onto Facebook.

A victim impact statement from head teacher Andrew Foord said the fire had had a massive impact on teachers, children and families.

The school will not reopen until the end of 2016 and temporary arrangements have been made for pupils and staff.