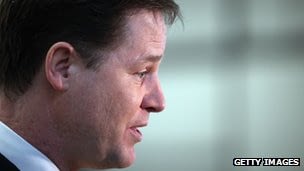 A London council has been criticised for sending out leaflets suggesting people foster a child to avoid losing benefits if they have empty bedrooms.

Under government plans, social housing tenants who have a spare bedroom could have housing benefit cut from 1 April.

Deputy Prime Minister Nick Clegg said the Labour-run Ealing Council should not have sent out the leaflets.

The council said foster care applicants would not be approved if their “sole motivation” was financial gain.

A caller to the deputy prime minister’s weekly radio phone-in on LBC 97.3, who gave her name only as Lisa, said she had received a letter from Ealing Council suggesting she could “subsidise” the loss by taking in a foster child.

Mr Clegg said it was wrong for councils to suggest families should take such a drastic step simply to cover a £14-a-week cut in benefit.

“I think it is not right for Ealing Council to take what was an exemption that we announced a couple of weeks ago when we said foster families will not be covered by this and then to use that locally to say ‘why don’t you turn yourself into a foster family?’,” he said.

An Ealing Council spokeswoman said: “We want as many people as possible to consider fostering and recognise welfare benefit changes may have appeared to be a barrier to some families who could become potential foster parents.

“Until recently foster families were not exempt from the changes regarding spare bedrooms so we produced a leaflet to explain the position.”

He added: “We have a very rigorous assessment process and if financial gain was the sole motivation the applicant would not be approved.”

Contact us for more information about fostering and to apply to foster children.