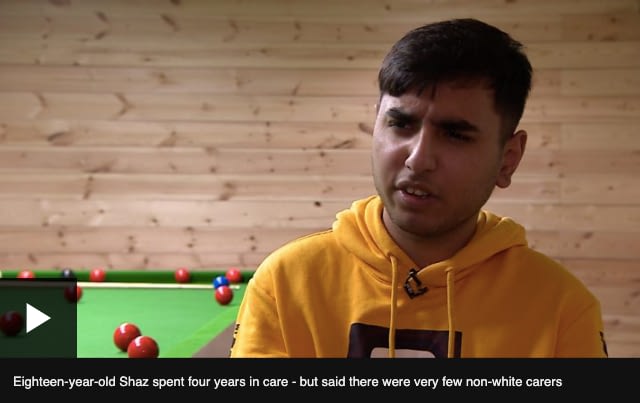 Two-thirds of councils in England have a shortage of black, Asian or minority ethnic (BAME) foster carers, according to BBC analysis of official figures.

A fostering expert said this meant many children were growing up without a full sense of their identity.

Shaz, 18, who was cared for by non-Muslims, told the BBC: “I felt like I didn’t belong and I had to be white.”

The BBC has analysed figures from Ofsted, which has data from 146 of the 153 local authorities that provide fostering services in England.

The analysis found 99 authorities – 68% of the 146 – had a shortage or undersupply of foster carers from a BAME background.

Authorities were deemed to have an undersupply when the gap between the percentage of carers and percentage of foster children who were BAME was bigger than five, and they had at least 15 children in foster care.

Until he turned 18 last year, Shaz, a British Muslim of Pakistani heritage from Bradford, had been in care for four years, spending his time in three different care homes.

He was never placed with a Muslim foster family and many of his care staff were white.

“It was weird because, being Muslim, I eat halal meat and I go to the mosque and stuff like that, but then when I transitioned into being in care they didn’t know what that meant.

“In quite a lot of circumstances they would give me pork and stuff but then I wouldn’t eat it and I would explain to them I wasn’t going to eat it but then I would get into arguments and it was like ‘you can’t force feed me’.

“In an ideal situation I would have liked to have been fostered by an Asian family because they would be more understanding and open-minded and they would know what to do.

Ms Donelan, who was appointed as temporary children’s minister in September, said: “I think that’s extremely upsetting and I’d love to meet him to hear personally about his own experience and how we can ensure that doesn’t happen again in the future.

“I’m extremely concerned about it because I think we’re letting down children and that’s why we’re making sure that we give a focus to adoption and fostering in general as well, because I don’t want any child going without a loving home and without that permanence and security that all the research shows gives them the best opportunity in life.

“It’s really important to a child that they have some understanding of their roots and their culture and their own identity for their personal development.”

Sagheer Hussain and Fatima Gora, from Bradford, have been fostering children for 16 years and have cared for children from many different backgrounds.

Mr Hussain said: “We live in a multi-cultural society and there’s a lot more kids from ethnic backgrounds coming into care.

“If there were more carers from BAME backgrounds they’d be able to meet these needs.”

Fostering charity Coram BAAF told the BBC that often when a child came into care the priority was to provide them with a safe place and sometimes their other needs were ignored.

Dr John Simmons, director of policy and research at Coram BAAF, said: “Sometimes something which is so fundamental seems so easily to slip off the agenda, as other more fundamental issues, is there a placement, is there a bed for this child overnight rather than our duty and responsibility to make sure that child actually develops a settled sense of who they are.

“The child’s ethnicity and faith are fundamental to who the child will become and to ignore all of that really does put the child at significant risk about developing a secure sense of who they are.”