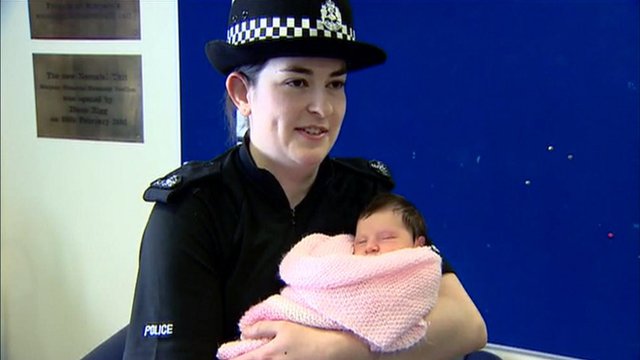 15 April 2013 Last updated at 17:34
Foster Care – PC Charlotte Work reunited with baby Charlotte who was found abandoned on a street bench in Edinburgh

A baby found abandoned on a bench is expected to be placed into foster care on Tuesday, BBC Scotland has learned.

Baby Charlotte has been cared for at Edinburgh Royal Infirmary since she was discovered by a passer-by in Hailesland Park at 12:55 on Thursday.

Charlotte weighs 2.6kg (5.7lbs) and all routine newborn checks have been carried out.

The police officer who accompanied the baby to hospital when she was found has urged the mother to seek medical help.

A foster family has been found for Charlotte.

Baby Charlotte has been named after policewoman PC Charlotte Work, who accompanied her to hospital.

Ms Work, who was visiting baby Charlotte on Monday, said: “I am delighted that baby Charlotte is doing well and that there are no concerns for her health.

“As part of my duties it was important that an officer accompanied the child to the hospital, but it is very flattering that the staff chose to name her after me.

“What is more important, however, is for us to trace Charlotte’s mother and ensure she receives all the necessary medical attention and support she requires.

“I would urge her to get in touch with her doctor, attend at hospital or contact police so we can make sure she is safe and well.”

Lawrence Liddell, 59, from Hailesland Park, told BBC Scotland how he was in shock after finding the baby.

She was thought to be no more than a day old when she was found.